Many states rivaled for power at the end of Zhou Dynasty. This is known as the Period of Warring States (475-221 BC). Among them were seven strong ones. These states came about because the emperors of Zhou annexed territories to relatives and imperial officials for them to govern. These people gradually declared themselves kings of independent states. After much fighting and diplomatic maneuvering, the emperor of the state of Qin became the victor in 221 BC. Not only was his state strong, his army powerful and his ability as a leader truly exceptional, he also knew how to play one of the other six states off against another and broke the alliance once formed by them. 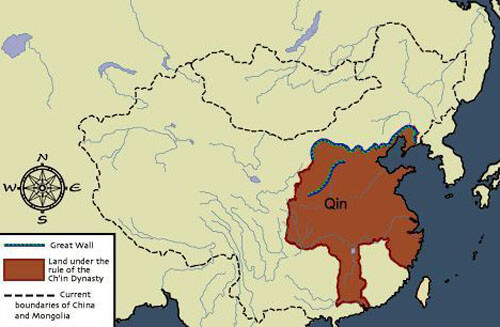 Historians have blamed some of the other six states for appeasing Qin, but the military power and skillful diplomacy of the latter also contributed to its success. The Qin Emperor, Ying Zheng, named himself Shi Huangdi (First Emperor), a formulation of titles previously reserved for deities and the mythological sage-emperors. He is known by historians as Qin Shi Huang. He wanted his successors to rule China forever with the title (Second Emperor), (Third Emperor) etc.

The First Emperor succeeded in unifying the country as one political entity and unifying the written language and the system of weights and measures. Realizing the danger of decentralization by allowing too much power to the regional aristocrats, he centralized the administration by placing the regional and local governors under the control of the central government. One of the main criticisms of his rule was that he ordered the burning of many books and the burial of many dissenting scholars alive. The freedom of expression was curtailed. To his credit he also built, or connected, large sections of the Great Wall to protect China from invasion. The name China originates from the word “Qin” as pronounced much like “chin.”

In consolidating power, the First Emperor imposed the State of Qin's centralized, non-hereditary bureaucratic system on his new empire in place of the Zhou's feudalistic one. The Qin Empire relied on the philosophy of legalism (with skillful advisors like Han Fei and Li Si). Centralization, achieved by ruthless methods, was focused on standardizing legal codes and bureaucratic procedures, the forms of writing and coinage, and the pattern of thought and scholarship. Characters from the former state of Qin became the standard for the entire empire. The length of the wheel axle was also unified and expressways standardized to ease transportation throughout the country. To silence criticism of imperial rule, the emperor banished or put to death many dissenting Confucian scholars and confiscated and burned their books.

To prevent future uprisings, the First Emperor ordered the confiscation of weapons and stored them in the capital. In order to prevent the resurgence of feudal lords, he also destroyed the walls and fortifications that had separated the previous six states. A national conscription was devised: every male between the ages of seventeen and sixty years was obliged to serve one year in the army. Qin aggrandizement was aided by frequent military expeditions pushing forward the frontiers in the north and south. To fend off barbarian intrusion (mainly against the Xiongnu in the north), the fortification walls built by the various warring states were connected to make a wall; this was an early precursor of the 5,000 kilometer long Great Wall of China built later during the Ming Dynasty. A number of public works projects, including canals and bridges, were also undertaken to consolidate and strengthen imperial rule. A lavish tomb for the emperor, complete with a Terracotta Army, was built near the capital Xianyang, a city half an hour from modern Xian. These activities required enormous levies of manpower and resources, not to mention repressive measures.

Endless labor in the later years of the First Emperor's reign started to provoke widespread discontent. In 210 BC, the First Emperor died on a journey through the empire. There is evidence suggests that the emperor was looking for an elixir of immortality. The cause of his death is still unknown. Through a series of uprisings and rebel alliances, Qin Dynasty was overthrown in 206 BC. Although the Qin Dynasty was short-lived, its legalist rule had a deep impact on later dynasties in China. The imperial system initiated during the Qin Dynasty set a pattern that was developed over the next two millennia.