Han Dynasty is considered as one of the greatest periods in the entire history of China. As a result, the members of the ethnic majority of Chinese people to this day still call themselves "people of Han," in honor of the Liu family and the dynasty they created. During the Han Dynasty, China was officially declared as a Confucian state. Han Dynasty encouraged the development of agriculture, the economy developed quickly and the population reached 50 million. Han Dynasty extended its political and cultural influence over Vietnam, Central Asia, Mongolia, and Korean Peninsula before it finally collapsed under a combination of domestic and external pressures. 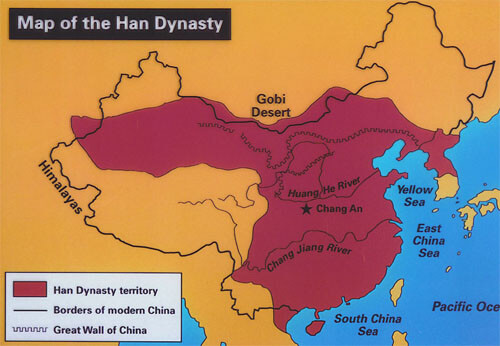 The empire of Qin did not last long. A well-known Chinese classical essay examining the fault of Qin attributes its downfall to its authoritarian rule and failure to treat the people with kindness. After the death of the First Emperor, the Second and Third Emperor was unable to rule. There came two powerful leaders of the states of Chu and Han. Their contention for the throne was so well remembered in China that the two sides of a Chinese chessboard are named after them. Chu started out as the much stronger of the two but finally lost to Han, which became the Han Dynasty (206 BC–220 AD).

One of the great Chinese inventions, paper, was dated from Han Dynasty. It is fair enough to state that contemporary empires of the Han Dynasty and the Roman Empire were the two superpowers of the known world. Several Roman embassies to China are recounted in Chinese history, starting with a Hou Hanshu (History of the Later Han) account of a Roman convoy set out by emperor Antoninus Pius that reached the Chinese capital Luoyang in 166 and was greeted by Emperor Huan.

The Han Dynasty was notable also for its military prowess. The empire expanded westward as far as the rim of the Tarim Basin (in modern Xinjiang-Uyghur Autonomous Region), making possible relatively secure caravan traffic across Central Asia. The paths of caravan traffic are often called the "Silk Road" because the route was used to export Chinese silk. Chinese armies also invaded and annexed parts of northern Vietnam and northern Korea (Wiman Joseon) toward the end of the second century BC. Han control of peripheral regions was generally insecure, however. To ensure peace with non-Han local powers, the Han court developed a mutually beneficial "tributary system." Non-Han states were allowed to remain autonomous in exchange for symbolic acceptance of Han overlordship. Tributary ties were confirmed and strengthened through intermarriages at the ruling level and periodic exchanges of gifts and goods.

From 138 BC, Emperor Wu also dispatched Zhang Qian twice as his envoy to the western regions, and in the process pioneered the route known as the Silk Road from Changan (today's Xian, Shaanxi Province), through Xinjiang and Central Asia, and on to the east coast of the Mediterranean Sea. Following Zhang Qian' embassy and report, commercial relations between China and Central as well as Western Asia flourished, as many Chinese missions were sent throughout the 1st century BC, initiating the development of the Silk Road. China also sent missions to Parthia, which were followed up by reciprocal missions from Parthian envoys around 100 BC.

The rapid growth of the Han Dynasty began when the Emperor Wu replaced the previous stable foreign policy of establishing tributary relationships with Non-Han states. He placed a central governmental body to bring the frontier regions under imperial control. Subsequent Han emperors continued that expansion. Frontier wars and internal rebellions caused by corruption, central government was not able to support the armies and control regional military governors. In 188, the regional military governors were far stronger than the central government in Luoyang. In 189, Dong Zhuo, a military governor from the northwest, seized the capital of Luoyang. In 220, the Emperor Xian, the last emperor of Han Dynasty abdicated to Cao Cao's son during the Three Kingdoms period.

People in Han Dynasty used four seasons and solar terms to determine the colors of their clothing. For instance, when spring came, they dressed in blue. Women in the Han Dynasty dressed themselves in an outfit that consisted of a blouse and a skirt.