The government was weak and the throne was in danger during the late period of the Ming Dynasty. With an uprising by Han people, and also invasions of the Mongolians from the North and the Manchus from the Northeast, Ming Dynasty was struggled. It finally collapsed and the Manchus succeeded in ruling China and founded the Qing Dynasty. The Qing emperors accepted the Han Chinese language as the official language and used the Han people to govern the country. The Qing emperors paid high respect to Han Chinese culture. 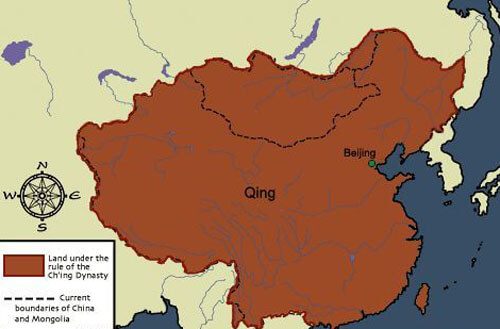 The Qing emperors in early period were very capable and intelligent. Emperor Kangxi, the second emperor of Qing Dynasty, was a capable leader and administrator. Using Han people to serve in his government, he established a strong government and expanded China’s spheres of influence to neighboring countries. He was responsible for the compilation of a comprehensive dictionary which the Chinese still use today.

In 19th century, British Empire was at the peak of its power. During the same period of time, the Qing emperors were incompetent and the government was weak. British Empire covered large areas in the continents of Africa, Europe, America, Asia and Australia. It included India, where economic power was exercised through the East India Company. Through this company, the British wanted to trade with China, as they desired Chinese goods such as porcelain, silk and especially tea. The British were consuming a large amount of tea at that time. To pay for the Chinese products, they needed to export to China. The Chinese did not care much about the products that the British had to offer, except for opium.


How did the Qing Dynasty fall?

The Qing government wanted to stop the import of opium. The conflict between Qing and British Empire resulted in the Opium War of 1840. China was defeated. In the Treaty of Nanjing signed in 1842, China not only gave up its right to prevent the import of opium, but was forced to give Hong Kong to the British and open its rivers for British shipping. Qing Dynasty became weaker following the defeat. The Chinese people were humiliated and angry at the British and the Qing government.

After the Opium War, other foreign powers obtained concessions from China through wars followed by a succession of unequal treaties. Controversies arose from attempts to open up Guangzhou to trade, resulting in a joint Anglo-French expedition against Beijing in 1858. One consequence of this episode was the burning of the famous Yuan Ming Yuan by the British and French troops. The Qing government was compelled to sign the Treaty of Beijing in 1860 and give up further rights to both countries. A war with France ended with the signing of the treaty of Tientsin in 1885, conceding Vietnam as a French protectorate. Burma was seceded to the British in 1886. In 1897, Germany occupied Tsingtao, and obtained a lease of Kiaochow for 99 years. Similar leasing agreements were reached with Russia (for Dalian), Britain (Weihaiwei) and France (Kwangchowwan). China’s concessions included war indemnities, opening of city ports, surrendering of rights to inland water navigation and to railroad building, leasing of territories to foreign powers, and loss of territories formerly within China’s sphere of influence as stated above. Areas in parts of Shanghai were leased to the British, the French and other foreign governments.

Two of the most tragic events were the Sino-Japanese War of 1894 and the foreign invasion of 1900 after the Boxer Rebellion. Defeated in the Sino-Japanese War, Qing gave up Korea, a country formerly paying tribute to Qing Dynasty, and Taiwan, a part of its territory. In reaction to the rebellion of the Boxers who had harmed foreigners, armies from eight countries (Britain, Russia, Germany, France, America, Italy, Austria and Japan) invaded China and extracted indemnities from China. The American government later used a part of the war indemnity to support Chinese students to study in the United States. Many parts of China became semi-colonies of foreign powers. Modernization became the dream of the Qing government and its people, and nationalism was aroused. Some government officials initiated what was known as the Hundred Days’ Reform of the Qing government in 1898. It was supported by the weak and young Guangxu Emperor but opposed by the strong Empress Dowager. The reformers were quite idealistic, but the reform movement was able to last only for 103 days. Other officials in the Qing government did not support the Hundred Days’ Reform and preferred a more gradual reform, perhaps to establish a constitutional monarchy. Outside the government, anti-Qing rebellions advocated a revolution to overthrow the Qing Dynasty for its failure in dealing with the foreign invasions and in modernizing China, and it succeeded in 1911.

Anti-Qing revolution succeeded in 1911 when the Qing government was overthrown and the Republic of China was established. The revolution succeeded because the Qing government no longer received the support of the Chinese people, or even of its own army which yielded to the revolutionaries. The revolutionaries were not well organized. They attempted to overthrow the Qing government several times without success. Many of them were surprised when one attempt in Wuhan succeeded in 1911. Sun Yat-sen, the leader of the Nationalist Party, hurriedly returned from abroad to become its Temporary President. The 37 years history of the Republic of China was a short, but very turbulent and decisive period of Chinese history. The chances for a thorough political and social change were missed by internal turmoil and external challenge (Japanese aggression).