After Tang Dynasty, there is the period of Five Dynasties and Ten Kingdoms (907-960) between the Tang Dynasty and Song Dynasty. During this period, five dynasties succeeded each other in rapid succession in the north, and more than a dozen independent states were established, only ten of them are traditionally listed, hence giving rise to the name Ten Kingdoms. The Northern Song Dynasty, established in 960, was determined to reunify China. Jingnan and Wuping were swept away in 963, Later Shu in 965, Southern Han in 971, Southern Tang in 975. Finally, Wuyue and Qingyuan gave up their land to Northern Song in 978, bringing all of South China into the control of the central government. 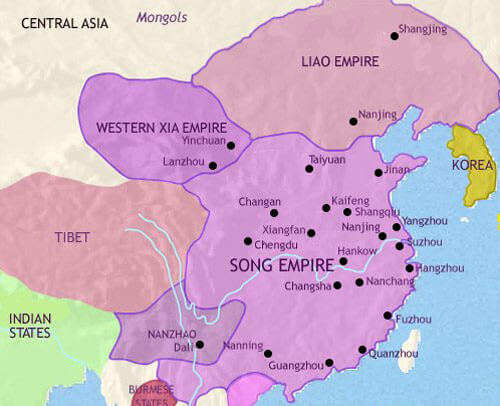 Song Dynasty was a time of consolidation for Chinese culture. The traditional state of civil administration fully developed and brought up a revival of Confucian thought, Neo-Confucianism, with many scholars commenting the traditional books, but also developing a more metaphysical worldview of the rather state-oriented old Confucianism. Song Dynasty is often known as the Chinese Renaissance, because of its similarities to the European renaissance for making progress in technology and inventions, the upcoming of new philosophical interpretations of the old texts meant a renewal of the old and the creation of new streaming. Confucian bureaucrats were in charge of the military in Song Dynasty. They saw soldiers as the lowest of all groups of people. Athletics and military skills were not esteemed as it was in Tang Dynasty. Song Dynasty had a military, but no warrior class. Its military began to be neglected.

Southern Song Dynasty rulers decided to make peace with the Jin Empire and a peace treaty was signed in 1141. Song Dynasty still controlled the richest part of China and about 60% of the population. Trade oriented more to the sea because the traditional trade routes to Inner Asia had been cut off. A bigger threat appeared later in the north, Mongolian tribes had been assembled under the leadership of Genghis Khan. Southern Song Dynasty was first safe when Mongolian was busy to attack Xia, Jin and western Asia. After Mongolian conquered the entire northern part of China, it invaded Song Dynasty and established the Yuan Dynasty in 1279.