The glorious Tang Dynasty (618–907), with its capital at Changan, the most populous city in the world at the time, was known for many great achievements. The Chinese people were also called the Tang people. Chinatowns in America today are still called the “Streets of the Tang People” in Chinese. Its territory, acquired through the military exploits of its early rulers, was greater than that of the Han. Stimulated by contact with India and the Middle East, the Empire saw a flowering of creativity in many fields. 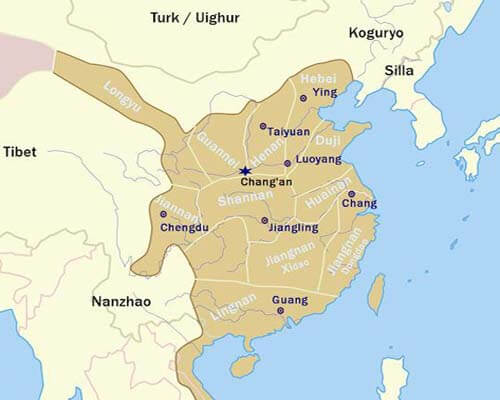 Tang Dynasty was the golden age of Chinese literature and art. A government system supported by a large class of Confucian literati selected through civil service examinations was perfected under Tang rule. This competitive procedure was designed to draw the best talents into government. But perhaps an even greater consideration for the Tang rulers, aware that imperial dependence on powerful aristocratic families and warlords would have destabilizing consequences, was to create a body of career officials having no autonomous territorial or functional power base. As it turned out, these scholar-officials acquired status in their local communities, family ties, and shared values that connected them to the imperial court.

The tri-colored Tang Horses made of clay are exhibited in art museums and admired by many. Buddhism from India began to gain popularity in China during the Tang Dynasty. When trade with the west was flourishing, worshipers commissioned colorful religious paintings on the walls inside the caves along the Silk Route. These are among the art treasures of the world.

For Chinese people, Tang poetry was the most appreciated achievement of this period. A book of 300 best known poems written by Tang poets can be found in every Chinese home, even if there is a collection of only a small number of books. The best-loved poems are simple, conveying an interesting or emotionally moving message. They are easy to memorize and rhyme beautifully. There are so many good poems for an ordinary educated Chinese to recite that even those who cannot read can recite a few popular ones.

Li Yuan founded the Tang Dynasty but only ruled for a few years before being deposed by his son, Li Shimin, later known as Tang Taizong. He is considered as one of the greatest rulers in Chinese history. Tang Taizong then set out to solve internal problems within the government. Internal problems have constantly plagued past dynasties. The Emperor had three administrations: Military Affairs, Censorate, and Council of State. Each administration had its own job. It was also during the Tang Dynasty that the only female ruler of China Empress Wu Zetian made her mark. Her rule would be only a handful of examples where women seized power and ruled China and the only one in Chinese history to rule in her own right.

Wu Zetian was born in 624. She was the first and only female emperor in Chinese history who ruled the whole country for almost half a century. Wu Zetian is generally viewed as an effective ruler, but overly ambitious and ruthless in attaining her power. Wu Zetian reformed government officer recruitment measures, which allowed talented individuals born in lower class families having the chance to become government officers.

The early decades of the eighth century was ultimately considered at the peak of the Tang Dynasty if not the whole Chinese civilization. Tang Xuanzong, the seventh emperor of the Tang Dynasty, brought China to its golden age and Tang influences reached all the way to Japan and Korea in the east, Vietnam in the south and central and western Asia in the west. The turning point came in 755 during the closing years of the Xuanzong Emperor, where the An Lushan rebellion destroyed the Tang Dynasty and the prosperity that took years to buildup. It left the dynasty weakened and for the remaining 150 years the Tang Dynasty never regained its glory days of the 7th and 8th century. In 907, Zhu Wen, a military governor, forced the Aidi Emperor to abdicate and took the throne for himself. He proclaimed himself first emperor of the Liang Dynasty, one of the dynasties in the period of Five Dynasties and Ten Kingdoms.

With the development of textile, more slight and soft cloth had been invented and thus gave more change in clothes in Tang Dynasty. Men in Tang Dynasty often wore a round-collared robe and belt over this. The color of the robe and any decoration was determined by the individual’s rank, and commoners could only wear white linen or hemp robes that didn’t go past their thighs. Women would also occasionally wear men's clothing. Women in Tang Dynasty usually wore dresses with a belt fastened above the breast. The colors of dresses mostly came in red, purple, yellow and green. The dress would contain a low-cut bodice with a cape behind.