The Zhou Dynasty lasted longer than any other dynasty in Chinese history, and the use of iron was introduced to ancient China during this time. The Zhou Dynasty was founded by the Ji family and had its capital at Hao (near the present-day city of Xian). Sharing the language and culture of the Shang, the early Zhou rulers, through conquest and colonization, gradually sinicized, that is, extended Shang culture through much of China Proper north of the Yangtze River. In western histories, the Zhou period is often described as feudalism because the Zhou's early decentralized rule invites comparison with medieval rule in Europe. 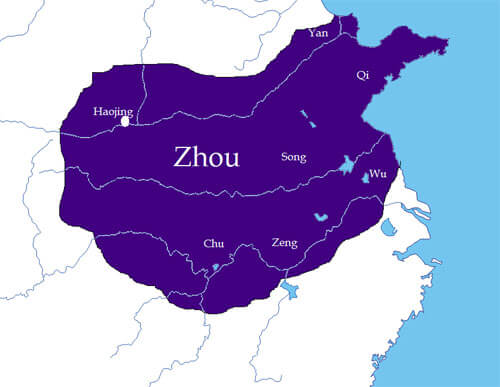 However, historians debate the meaning of the term feudal, the more appropriate term for the Zhou Dynasty's political arrangement would be from the Chinese language itself: the Fengjian system. The Zhou amalgam of city-states became progressively centralized and established increasingly impersonal political and economic institutions. These developments, which probably occurred in the later Zhou period, were manifested in greater central control over local governments and a more routinized agrarian taxation. In Chinese histories, the Zhou Dynasty marks the beginning of the feudal phase of Chinese history, a period which is said to extend to the fall of the Qing Dynasty in 1911.

With the royal line broken, the power of the Zhou court gradually diminished, the fragmentation of the kingdom accelerated. From Ping Wang onwards, the Zhou kings ruled in name only, with true power lying in the hands of powerful nobles. Towards the end of the Zhou Dynasty, the nobles did not even bother to acknowledge the Ji family symbolically and declared themselves to be kings. They wanted to be the king of the kings. Finally, the dynasty was obliterated by Qin Shi Huang's unification of China in 221 BC.

Mathematics was already fairly advanced in the Zhou Dynasty in 1100 BC as imbedded in Yiching, The Book of Changes. This book can be found in most American bookstores. Besides Yiching, other books of the Zhou period were impressive, including the Book of Poems, the Book of Learning, the Book of Li (Rules of Social Conduct), and Spring and Autumn (History of the Late Zhou Period). There were many great thinkers during this period. Among them Confucius (551–479 BC) was the most celebrated. He is considered the originator of Chinese humanism. He established moral codes to guide human conduct, and a set of proper relations among different members of a society, between emperor and subjects, parents and children, older and younger brothers, and husband and wife.

Besides Confucius, there were many other prominent philosophers. There was Lao Tse who was the founder of Daoism, advocating the return to nature and “doing nothing in following the course of nature.” Lao Tse suggested that if there are no laws, there will be no laws to break and there will be no criminals. There was Han Fei-tze who taught almost the opposite by emphasizing the importance of the legal system. There was Guan Zhong who understood much economics including the incentives of different forms of government taxation. There were a hundred schools of thought contending, like a hundred flowers blooming and a hundred birds singing. It was a golden period of China’s cultural development. The writings of that period are available today for us to read and enjoy.

Agriculture in Zhou Dynasty was very intensive and in many cases directed by the government. All farming lands were owned by nobles, who then gave their land to their serfs, similar to European feudalism. For example, a piece of land was divided into nine squares in the shape of the character jing, with the grain from the middle square taken by the government and that of surrounding squares kept by individual farmers. This way, the government was able to store surplus food and distribute them in times of famine or bad harvest. Some important manufacturing sectors during this period include bronze making, which was integral in making weapons and farming tools. Again, these industries were dominated by the nobility who direct the production of such materials.

In Zhou Dynasty, people wore a suit of clothes, which consisted of a long top part with a belt around the waist and a lower part. It had short sleeves with a hem that dangled to the knees.